2 Shows up now in Phoenix

I went to several shows first friday, but two stuck out in my mind.

First, the Mixed Emotions show at the Stark Gallery in the Xavier Prep school. (About the school: Think rich kids. I mean they had giant ornate christmas trees in the school lobby. At my high school those trees would have lasted about thirty seconds before an ornament-snow-ball war broke out.) The show was currated by Ann Morton and included working by herself, Brooke Heuts, and Kelsey Wiskirchen. The show looked absolutely gorgeous in the space. All of the work went really well together and mixed flat with three dimensional work. The lighting was perfect for the muted colors used by all of the artists. Â Kelsey showed her woven newspapers and books, Brooke has her restructured quilts, and Ann displayed a mixture from her found object index. Â The only thing that didn’t make sense was the title, Mixed Emotions, as none of the worked seemed overly emotional. Â The ASU galleries could learn a lot from how well Stark is set up and maintained (wood floors, hint hint). Â The show is up through 11 February 2010.

The next show was A Bunch of Crock at Bragg’s Pie Factory by artist Safwat Saleem. Â After Nathaniel Lewis’s thesis exhibition, this is the next best show I’ve seen thus far in Phoenix. Â In a city that is plagued with harsh politics that are questioned in state and incomprehensibleÂ to those out of state, this show goes a long way in rethinking the composition of political art. Â In his own words:

A Bunch of Crock is an art exhibit about the absurdities of political campaigns and the unfortunate role of minorities. Filtering through various political messages in this election year, the common thread seems to be this: 1) politicians and pundits think the general population is too stupid to tell fact from fiction and 2) promoting fear of minorities is good politics.

Using satire and good old-fashioned profanity, this exhibit attempts to bypass the spin and tell the audience what the politicians and pundits actually mean, and how they portray minorities to promote fear and manufacture outrage.

And he is largely successful. Â The posters show excellent craftsmanship, wit, and humor. Â But, Saleem took his satyrical perspective and applied it to all elements of the show including the food, my personal favorite. Â Unfortunately I think this show was only up for first friday. Â However, there is a great deal of information about the project on his website. 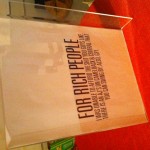 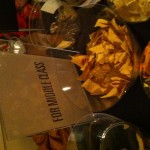 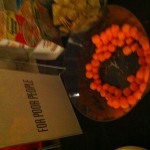 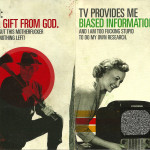