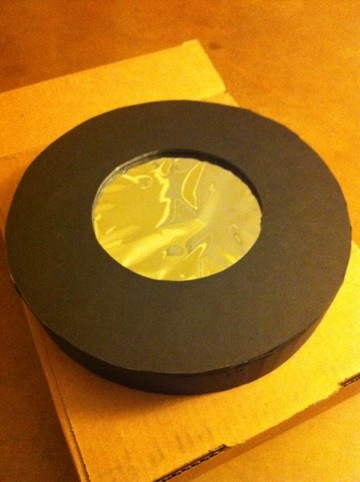 Just finished making my solar filter so that I can view the Venus Transit, visible everywhere in North America on 5 June 2012. The Venus Transit is an alignment of the Earth, Sun, and Venus such that observers on Earth can see the small black dot of Venus cross the disk of the Sun. I believe the next one will be in 2133, so this is a once in a lifetime opportunity. I ordered a 5″ piece of Baader solar film on ebay for $20 shipped. Since the sun is the target, aperture is not as important and a smaller aperture can actually reduce the atmosphere turbulence. So I stopped my 8″ Zhumell reflector down to 5″ with a custom black foam core “lid” that I made in less than an hour. The solar film came with easy to follow instructions on how to make the step down ring. I took the new rig outside to try it out, starting with my 9mm eyepiece with a moon filter on for extra safety. It was so dark I couldn’t even see the sun, so I went for the 30mm and it worked great. I figured out that an easy way to find the sun (you don’t want to use a finder scope) is to look at the shadow of your scope. When the tube’s shadow is a circle, or as small as you can make it, your pointed right at the sun. Nifty. Here are some pics.